I played this game for a couple of hours and I really enjoyed it.  All the bugs that were in the original hack have been fixed (Well I didn’t run in to any) 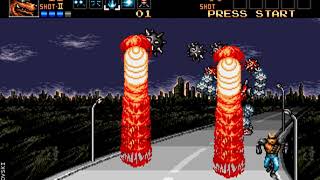 Contra Hard Corps IT GAMER Ultra Hack is a complete rework of Contra: Hard Corps which adds a slew of features and gameplay tweaks for the ultimate

Where this hack excels up front is its inclusion of seven heroes which greatly expands on the original game’s cast; furthermore, each hero has their own unique equipment and some abilities to give them all their own nuanced feel. With heavy damage and mechanic reworks to weapons, enemies, and bosses, the game has also been beefed up with an expanded life bar as well as starting the player with ten (10) lives at the start.

Contra games are known for there difficulty, in this game they make things a little easier for you like being able to choose to start with up to 30 lives.  Weapon damage is also reduced by half. Each of Contra: Hard Corps alternate pathways that were present in the original title have been streamlined creating a seamless flow from start to finish.

You can also expect some new weapons in the game.

The title screen has slightly changed from the original game as seen below. No graphic changes have been made in this game.  You can expect the same original graphics that were in the first game.

For me the original Contra game was far to hard and I never managed to complete the game.  This game makes things easier for you by reduced damage taken, more lives as well as giving out more damage which makes the game much more playable.

No improvements / changes were made to the sound.

So is this game worth a try? Contra Hard Corps IT GAMER Ultra Hack is an impressive reworking of the beloved Contra: Hard Corps game and a must for long time fans; with new characters and weapons, this provides a breath of fresh air into an old title.