BattleTech: Operation Revival is an improvement hack for  BattleTech release to Sega Megadrive in 1994 . It is designed to adjust the gameplay in hopes of making the game more enjoyable over all by scaling down the game’s natural difficulty through providing various benefits to the player. Some fans may remember this game as MechWarrior 3050 as the name was changed when the game was ported from the Sega Megadrive to the SNES in 1995. Both games are virtually identical barring the title.

Below is a Youtube video of BattleTech: Operation Revival. 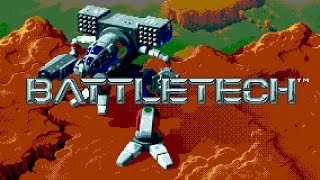 Much of this project’s goal was based around making changes to the game in order to make it feel closer to the BattleTech universe, as such, many of the weapons’ names and descriptions were changed to be more lore-friendly. As is common with a number of hacks that alter gameplay, this hack provides the player the option to start off with more lives at the beginning of the game to put padding on some of the difficulty. The difficulty of the game has overall been dialed back by balancing a handful of options including ammunition capacity and damage from environmental hazards.

The original title screen of BattleTech is presented in this hack with no alterations. There were no significant graphical alterations made in this hack aside from changes to the text in regards to renaming weapons and altering some dialogue/mission briefs.

The BattleTech: Operation Revival hack presents a handful of core mechanics that have been manipulated including greatly increasing ammo capacity to drive home the feeling of being an unstoppable machine of war; furthermore, weapons no longer explode when overcharging.

An extremely important feature added by the developers is the fact that environmental hazards no longer damage your mech and only increase your heat instead, removing some of the games already overflowing lethality. This is also achieved by increasing the number of lives that players start with to five. This hack also removes the danger of overheating the PPC (Particle Projection Cannon) when charging it up. The PCC is easily one of the strongest weapons in the game when charged and to balance this the developers built in a risk of it exploding when overheated. Well no more! Operation Revival removes this threat is disarmament, though it is still possible to overheat the weapon and your mech by overcharging.

All original sounds and music for the game remain unchanged in this hack.

If you wish to play this game you can download the BattleTech: Operation Revival Rom from here

So is this game worth a try? If you are a long standing fan of BattleTech, particularly if you are a follower of the lore, this hack does the game justice by improving on some of the lore elements and greatly improving on the overall gameplay experience without ruining the difficulty. Operation Revival offers a more lenient gameplay experience by increasing ammo capacity, removing the handicap of the most powerful weapon in the game, and scaling back the effects of environmental hazards that could be just as dangerous as the enemies you face. Highly recommended for fans and newcomers alike.