Donkey Kong Country Expert Edition is a ROM hack created by a user simply known as Q, which is aimed at slightly increasing the game’s difficulty by placing limitations on the player. If you want to see a video of Donkey Kong Country Expert Edition in action, check out the video below. 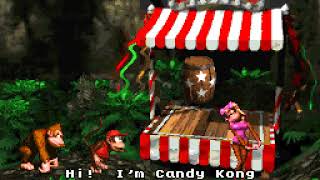 Players will find that all DK barrels, as well as Star and Warp barrels, have been removed from the game with the intent of making the game more challenging. As the first DKC game is considered to be one of the easiest of the series, this should serve as a welcome change for challenge seeking fans. Expert Edition offers a clean challenge for players that are looking to test their skill in a pure “no deaths” run of DKC.

The title screen of this hack is the same as it was in the original release of the game. No changes to the graphics were made for this hack.

Donkey Kong Country Expert Edition increases the difficulty of the base game by removing elements that served to support and revitalize the player in each course. At the beginning of the game players will start with both Kongs, instead of gaining access to the other via a barrel, and from there are left to conquer the level with no chance of regaining “hit points.” The removal of Warp Barrels and Star Barrels ensure that the player is forced to complete each level without any outside assistance or shortcuts, aside from hidden paths, to undermine the base difficulty of the game.

All sounds and music remain unaltered for this hack. If you wish to play this game you can download the Donkey Kong Country Expert Edition Rom by clicking here.

So is this game worth a try? Donkey Kong Country Expert Edition is a simple difficulty hack aimed at ramping up the challenge presented by DKC. Purists and challenge seekers will enjoy this one as it does little to alter the original experience of DKC only restricting the player to parameters that will force them to apply their skills.