Brutal Mario is a ROM hack, created by Carol, of the Nintendo classic Super Mario World and sets out to bring players . If you want to see a video of Brutal Mario in action, check out the video below. 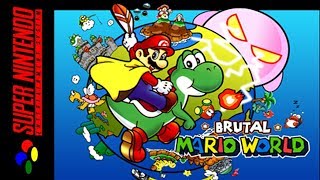 Even though it remains unfinished to this day Brutal Mario is easily one of the most iconic SMW hacks out there and features 11 worlds with 96 different levels (quite the hefty count and gameplay time for an unfinished product). Since it’s release in first known demo release in 2006, the hack has seen a number of various versions released but many of them have been taken down as the hack creator Carol has decided to remove them. Currently Demo 7 is the most widely known and played. This hack makes use of a lot of concepts and ideas from other popular games such as Kirby, Mega Man, Final Fantasy, and more. It is ideas like this that make the hack stand out and what launched it into its fame a long with the overall design which, by all intents and purposes, feels like a professional product. Brutal Mario is one of few hacks that managed to surprise me with some of the things it implements throughout the gameplay. There are new and interesting sections all throughout the game that I had not considered would ever be part of SMK. In fact, part of the game’s difficulty lies in it’s oddities when compared to other SMW hacks.

I believe there is supposed to be a unique title screen for the hack but I either did something strange during patching (maybe not the right ROM?) or it was not implemented in Demo 7. The one I saw does glitch oddly though, so that’s a thing. There are a number of minor graphical changes to this game in the way of altered tile sets and backgrounds which set it apart from the classic SMW look. There are also a slew of custom sprites for various enemies and bosses.

Brutal Mario sets itself apart with completely new and innovative gameplay sequences that are atypical for SMW. Many of these ideas take inspiration from other popular titles. Many levels will have multiple boss fights throughout and/or boss fights will venture away from the traditional “step on the bosses head” mechanic and have the player defeat them. For instance, there is a boss the mirror your movement but you cannot attack them therefore you must open up a space in the floor for them to fall into and guide them into it. Nothing breathtaking here but still a step outside of the box for SMW where variety can be somewhat lacking.

The game, while difficult in that it often requires you to be skilled enough to progress through levels with limited resources (either keeping your powerup the entire time or being making sure you have one in reserve) does offer a great deal up level ups to counter balance the fact that you may be dying over and over again.

As far as I have seen there are no new sound effects or music added to this hack. If you wish to play this game you can download the Brutal Mario Rom by clicking here.

So is this game worth a try? Brutal Mario is one of the most ambitious and innovative SMW hacks out there and wears its alt-universe Mario theme on its sleeve offering many visual elements and challenges that are so different from what players would expect from a SMW hack. A brilliant piece of work and a fresh spin on SWM that could renew the most worn down veteran’s enthusiasm for the title.