Created by two hackers, pacnsacdave and Trifindo, Legend of Zelda: Awakening of Onyx is a complete ROM hack of the original Legend of Zelda game that presents players with a totally reworked game complete with new graphics, items, enemies, and levels/maps. The Legend of Zelda is one of Nintendo‘s greatest franchises and the game of the same name that spawned its commercial success has been widely considered one of the greatest games of all time. Originally released for the Famicom (Family Computer Disk System) in 1986, The Legend of Zelda would later go on to release on the NES in Western markets and secure its place among the top five best selling NES games and go on to spawn numerous successors and spinoffs still beloved by gamers to this day.

If you want to see a video of Awakening of Onyx in action, check out the video below. 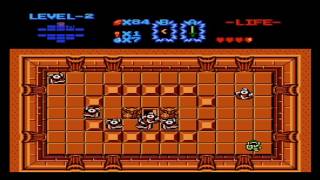 Awakening of Onyx sets out, like a many other hacks, to reimagine the world of Zelda and presents an entirely new adventure for player’s to experience. Notably, the hack has changed all of the graphics from the game from start to finish. Whether purposefully or not, this hack appears graphically similar to Link’s Awakening which launched for the Nintendo Game Boy in 1993. Overall, it seems like an improvement to the graphics of the original NES title. The story of Awakening of Onyx appears to make use of an existing antagonist from another game in the series, Oracle of Seasons, named General Onox (the game misspells the name as Onyx which appears to be a typo that never got entirely fixed). This General of Darkness has kidnapped Zelda as well as stolen the Triforce and is using the power to prevent Link from coming to Zelda’s rescue. In his quest, Link must collect the eight Spirit Skulls which together can counter the magic of the Triforce and allow him to assault Onox’s fortress and rescue the princess. Common amongst hacks in general, the difficulty is noted to be ramped up from the base game, something that comes as almost a guaranteed when hacks are altering levels, enemy locations, items, and puzzles. The first few levels of Awakening of Onyx seem to hold up to a similar challenge level of the base game but seems to take off full tilt around the fourth level and only gets harder from there.

There are a number of alterations made to the original title screen of the game, as shown below. The entire hack presents a major graphical change to the original game. The graphics appear to have been completely overhauled from the ground up causing the game to look like a completely different title. Players will venture through all new levels, completely redesigned, and experience new enemies as well, many with palette swaps.

Awakening of Onyx makes a number of alterations to the way that the original game functions. Players will experience all new challenge and puzzles to go along with the new overworld/dungeons that they will be venturing through. Notably, the game seems to be aware of its marginally tougher difficulty and offers much more in the way of bombs, money, etc. to the player as a way to appease this “issue.”

Few sounds and music were changed in Awakening of Onyx. Namely, the opening theme of the game appears to have been remixed but mostly everything else appears to be as they were in the original version of the game. If you wish to play this game you can download the Awakening of Onyx Rom by clicking here.

In the instructions for this hack, it references that you must use a Legend of Zelda, The (U) (PRG0) [!].nes ROM. This is incorrect. Players will need to use a (PRG1) ROM for the patch to work.

So is this game worth a try? Awakening of Onyx offers a completely new visual experience for The Legend of Zelda players as well as and all new adventure and new challenges along with new items to boot. This hack almost seems like a reboot of the original title rather than a simple hack.

While the difficulty is slightly ramped up from the original title, what with a variety of enemies being able to one-shot the player if they have not taken the time to upgrade appropriately, it offers plenty of chances to level the playing field with an increased drop rate of all basic items. Even so, frustration seems to be inevitable, especially for new players, as these types of jabs to the gut become more frequent as the game progresses.