The Legend of Zelda: Shadow of Night is a complete ROM hack created by the_icepenguin of Zelda II: The Adventure of Link which aims to send players on an entirely new Zelda adventure with loads of new content along with music and reworked systems. If you want to see a video of Shadow of Night in action, check out the video below. 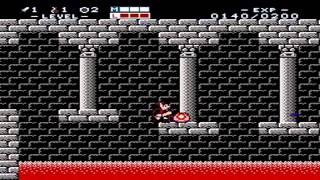 Following the creation and debut of his other NES Zelda hacks, the_icepenguin started work on his final and subsequently largest Zelda II hack known as Shadow of Night. This time around, he has enlisted a number of talented individuals to assist him in the creation namely on music, animations, and reprogramming enemy AI. The story of Shadow of Night makes no reference to Zelda or the Triforce in particular but tells the tale of the land of Hyrule being set upon by a curse which has brought darkness and empowered the minions of Ganon. Naturally, it is up to Link to get off his lazy rump and save the world by defeating the shadow. Since it’s first version, this hack has gotten a lot of attention and gone through plenty of changes as the creator continued to tweak the game as per comments and  feedback that he got on this one. Version 1.0 received a number of complaints about the grindiness of the game which was a combination of the game’s general difficulty and how the EXP system had been tweaked. Since then, the game seems much more balanced and less of a grind fest and is complete with two versions, an Easy and a Hard mode. This hack takes the effort of completely touching of the graphics of the classic game by altering textures and changing the color palette to be more fitting with the theme of the hack. Everything is appear to be cast in a much darker tone than the original game.

Shadow of Night sets out not only to significantly change the visuals of the game to fit the new theme, it also sports much altered gameplay in the way of improved enemy AI and completely new overworld and levels. Players will notice that enemies damage has been tweaked in a number of cases.

A particular hold over from other the_icepenguin hacks is the increased range of Links Sword Beam when he’s act max health. This improved beam feels much more rewarding than the original game.

A few notable changes have been made to Mana and Spells in Shadow of Night. Most notably, the Life spell has had a significantly reduced cost. This is somewhat counterbalanced by the fact that places to recover your Mana have been reduced throughout the game. Also, the creator of this hack has added a new spell called Dash to the game.

There is one bit of completely new music, crafted by Optomon, in this game which is a remixed version of familiar Zelda music that is used on the overworld. Other sounds and music in the game remain much the same as the base game. If you wish to play this game you can download the Shadow of Night Rom by clicking here.

So is this game worth a try? Shadow of Night is the last of the_icepenguin‘s Zelda II hacks and it shows. A culmination of the things learned and gathering features together, this hack comes together as one of the more ambitious and but also authentic feeling Zelda II hacks out there. This one can take some grinding and skill to get into and I found myself relying on save states until I got a feel for the challenges I would be running into.

Ultimately, there is a lot going on in Shadow of Night that is done well but an otherwise glowing recommendation is tarnished by persistent back tracking and frustrating difficulty. Still, I would say give it a shot as it is well made; I can only say that some kind of guide would have made it less frustrating.