The Legend of Zelda Journey of A Day is a ROM hack, created by the_icepenguin, of Zelda II: The Adventure of Link which changes the base game into an all new experience including a new map and graphics. If you want to see a video of The Legend of Zelda Journey of A Day in action, check out the video below. 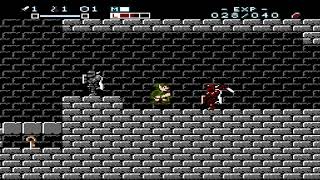 Journey of A Day sets out to present the player with a new adventure, providing them with new dungeons and a new overworld to explore as well as expanded dialogue from NPCs for that extra touch of immersion (or just a chuckle here and there) and much, much more that will make this hack feel like an entirely new game in the Zelda franchise. Something that neither the first Zelda game or the second, which this game is based off of, presented the player with an option to play on different difficulties. The hack creator has decided to implement and Easy and a Hard Mode to appease to as many players as possible. Easy Mode weakens enemies overall and gives Link a much stronger attack as well as more lives. Hard Mode is the exact opposite, containing enemies with increased AI and that hit much harder. Journey of A Day is the third hack created by the_icepenguin of Zelda II proceeded by his hacks called Zelda II – Part 2 and Zelda II – Part 3. Those hacks were notably more revolved around the idea of ramping up the difficulty of the base game while in this one the hack creator redirected his attention more toward crafting an all new adventure much closer to the balance of the parent game.

This hack offers a greatly altered title screen, as presented below, from the one presented in the base game.

Pretty much every aspect of the game has been altered from minor graphical changes to color palette, to larger changes like custom sprites. Players will not have a problem telling that this is not the same Zelda II that they are used to.

Journey of A Day alters the gameplay of the base game making it generally more difficult, although the hack creator did make a note of attempting to keep the game closer to the original games difficulty instead of simply ramping it up as he had done in previous hacks. Players will notice major changes to health as well as the level-up/experience system which mimics the base game’s but awards more experience and requires less to level up overall.

Another major change Journey of A Day makes to the game is the Sword Beam power and range which has been significantly increased as to make maintaining full health much more rewarding.

No new music or sounds were added to this hack though players my notice that songs appear in different areas or on different maps/dungeons. If you wish to play this game you can download the Journey of A Day Rom by clicking here.

So is this game worth a try? Journey of A Day toes the line of being a difficulty hack with a handful of new challenges for players that may take some trial and error to get used to. Enemies are simple but at the same time punishing and the hack makes Zelda II feel more like an RPG than ever.

Sticking to Zelda roots, going into the game is truly an adventure as you attempt to figure out exactly where you need to go and the challenges along the way will test your skills. While this initial blind floundering can be frustrating, I found myself enjoying this hack due to the challenge of learning my enemies and then correct order in which to progress.

Definitely recommended for anyone looking for a well designed alternate experience for Zelda II.