Ocarina of Time Redux is an improvement hack by Maroc which aims to add a number of quality of life (QoL) features to the timeless classic The Legend of Zelda: Ocarina of Time. If you want to see a video of Ocarina of Time Redux in action, check out the video below. 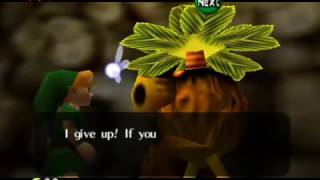 Unlike the official rerelease of Majora’s Mask for the 3DS, Ocarina of Time got a faithful rerelease on the system and fans generally hold in high regard. Even so, not everyone cares about the 3DS enough to buy one for one game alone. That’s where Ocarina of Time Redux comes in. This hack offers the quintessential OoT experience any fan could dream of, taking strides to implement QoL changes to nearly every aspect. Again stepping in and using the Randomizer version of the game as a base, Maroc uses what was already there and takes steps to improve upon the game even further creating something that can be considered the definitive way to enjoy OoT in the modern gaming era. Ocarina of Time Redux presents a long list of changes that were made to improve upon the overall experience of Ocarina of Time and the best part is that with the recent addition of a simply lovely tool known as Patcher64+ Tool players can pick and choose which changes they want to implement for their playthrough for their optimal gaming experience.

The original title screen of OoT exists unaltered for this hack. Outside of a few additional graphics, such as using Link’s model from Majora’s Mask, the game exists exactly as it did at it’s initial release.

Ocarina of Time Redux makes a number of major and minor changes to the base game. Some of these changes are as simple as increasing the text speed up from its modest crawl, or introducing the ability to switch Z-targeting between HOLD and TOGGLE modes. Other changes, like alterations to minigame’s rewards or allowing Young Link to wear different tunics, are a mixture between removing some of the game’s tedium and simply having the game rely less on RNG.

Some fans may remember the Stone of Agony in particular, the item in the game that would alert you to the presence of a Secret Grotto. This was a neat little feature of the game except for the oversight that its functionality was locked to a piece of external hardware for the N64 controller. Without a Rumble Pak, the Stone of Agony was virtually useless. This hack is obviously smart enough to alleviate that issue by adding a simple graphic that appears in the game which serves as the new alert system.

All sounds and music of the original release of the game remain unaltered for this hack.

If you wish to play this game you can download the Ocarina of Time Redux Rom by clicking here.

Patcher64+ Tool for patching your ROM for a custom experience.

So is this game worth a try? Ocarina of Time Redux is the perfect way to enjoy this Zelda classic again and alleviates a number of very minor issues in the game, removing loads of tedium and streamlining the experience.