Super Mario 74 Extreme Edition is a ROM hack of the Nintendo 64 title, Super Mario 64, created by Lugmillord and was widely considered to be the most punishing ROM hack available of the game until it was dethroned in the same year by several other hacks. If you want to see a video of Super Mario 74 Extreme Edition in action, check out the video below. 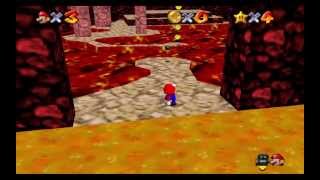 As something of a sequel to Rom hack Super Mario 74, this hack contains a majority of the levels from that hack but altered them in such a way to make them extremely difficult via adding treacherous environmental hazards or particularly fiendishly placed enemies. Unlike the original game’s story that paints Mario as an unrelenting and immaculate hero, this hack starts off with the denizens of the Mushroom Kingdom being significantly cross with Mario due to him being AWOL while the kingdom suffered. Toads will tell you that the adventures you remember were whimsical dreams against painless challenges. Now Mario is awake and it’s time to face the dangerous of the real world. Not for the feint of heart, Super Mario 74 Extreme Edition is bound to be a rage inducing experience with many of the stars being notoriously frustrating to gather without running a gauntlet of pain and determination before being able to collect them reliably. Saves states are highly recommended.

There have been minor changes to Super Mario 64‘s title screen as shown below. In playing this hack, players will be presented with a number of heavily edited levels but there are no significant changes to the overall graphics of the game and players should experience the same functionality and glitches present in the base game.

The first thing I noticed when sitting down to give Super Mario 74 Extreme Edition a try was that the game’s Lakitu camera is a real pain. It seems to ask the question “what does the player need to see” and proceeds to provide the exact opposite by drifting in various directions while you are moving. Using Mario’s camera seems to just be the safer bet all around. I may be missing something, but it did make me question whether or not it was a feature or not.

The hack is definitely aimed at long time Super Mario 64 players, in that it takes a quick recollection of everything you have learned from the original game to have a chance at success and each challenge is unforgiving to the point that a tiny misstep could lead to complete failure even amongst the first couple levels. That said, the first couple levels appear to be significantly less challenging than ones that follow and as such the hack has a steep difficulty curve that can prove to be jarring.

This hack offers a greatly altered soundtrack that pulls songs from various other titles, such as Donkey Kong 64, and uses them across several levels as well as the title screen and file select screen. Most songs from the original Super Mario 64 game have been remixed to sound different however there are a handful of unaltered songs. If you wish to play this game you can download the Super Mario 74 Extreme Edition Rom by clicking here.

In order to get this hack to work correctly on the Project64 emulator, I had to adjust some options in Setting>Config: SUPER MARIO 74EE and change the Memory Size to 8MB

So is this game worth a try? Super Mario 74 Extreme Edition is designed for grueling difficulty and crafted for hardcore Mario 64 fans that are looking for a significant challenge. Unforgiving and but ultimately fair, the hack requires a great deal of effort, skill, and precision to succeed. With new levels, more stars, and particularly devilish design, this hack stands as one of the most difficult Mario 64 hacks out there. At the end of the day, ever star that the player manages to get feels like an accomplishment which can leave you feeling rewarded and relieved long enough to keep you sprinting into the next rage inducing struggle.