Mario’s Nightmare 64 is a ROM hack by Apioeus for the N64 game Super Mario 64, it is designed to be more punishing and set in a much darker tone than the original game. If you want to see a video of Mario’s Nightmare 64 in action, check out the video below. 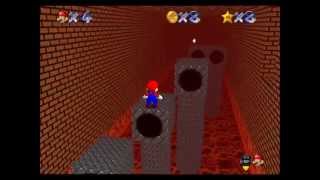 Like many of the difficulty oriented hacks that are out there, Mario’s Nightmare 64 tests the players running knowledge and skill in regards to the base challenge level of SM64. Personally, after not playing SM64 for quite some time, it took a great deal of effort from me to recall the timing and the use of particular abilities (not to mention getting used to that damned camera again). Mario’s Nightmare 64 presents SM64 in a new light, favoring a linear progression and forcing the player to face and conquer challenges. This alone puts this hack on a different challenge level than the base game by presenting the player with do or die opposition. While not “unfair”, Mario’s Nightmare 64 throws the player into the grinder with no apologies, so prepare to flex your skills and sanity.

This hack uses a slightly modified version of the title screen from the original game. The hack offers a completely thematically altered version of SM64 bringing a darker, more somber, tone to the game. Many of the levels take a page out of the book of games such as Castlevania and Majora’s Mask; many locales are located in or around castles, labyrinths, and gauntlets.

Mario’s Nightmare 64 brings a few new challenges to the classic SM64 gameplay by introducing more puzzles based on mazes and navigating traps. Much like the core gameplay of the original game, the player sets out to collect starts, however in this hack the player will have to collect the first star before the next one is accessible.

True to its name, this hack can be a bit of a nightmare when failing and having to start over in particular courses. Many of the courses require the player to travel from one course to the next and, more often than not, it is not a straight shot to get there –  you could very well die again if you botch a jump, condemned to suffer until you manage.

This hack uses a number of songs from various other titles such as Xenogears, Castlevania, and more. As a tone setter, a track from Castlevania 3 perfectly introduces the player to the much drearier theme this hack is going for. No new sound effects were added to the hack. If you wish to play this game you can download the Mario’s Nightmare 64 Rom by clicking here.

So is this game worth a try? Mario’s Nightmare 64 stands among a number of difficulty-based SM64 hacks while remaining fair. The hack is undeniably challenging 0and requires a healthy portion of elbow grease to battle through. Memory, exploration, and trial are key in this hack, and if there were ever at time to say “leave no rock unturned” this is the time it would apply most. Definitely recommended for challenge seekers.