Banjo Kazooie Returns is a romhack of the Nintendo 64 classic Banjo-Kazooie being created by SuperZambezi and is widely considered the best looking Banjo-Kazooie romhack to date. Banjo-Kazooie was released for the N64 in 1998 by Rare and is the first game in its franchise. The game widely features nonlinear gameplay where players will be challenged by puzzles, platforming, and various enemies prompting them to utilize Banjo’s range of abilities and gathered items. It was critically acclaimed for its dynamic soundtrack, level design, and graphics.

If you want to see a video of Banjo Kazooie Returns in action, check out the video below. 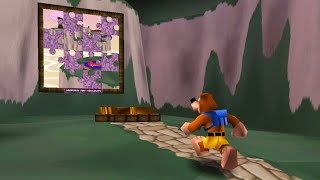 Banjo Kazooie Returns utilizes a level editor created by Skill and Coolboyman of Rareware Central called Banjo’s Backpack. The hack’s developer has been grinding away at this project since sometime in 2013 and has been releasing update trailers of his progress with the most recent trailer being September of this year. Appears to be on its way to fully featuring completely unique levels and a unique story as well. This is a common aspiration among BK hackers, but this one shows plenty of promise and the developer is always willing to listen to feedback from the community. At the moment, the developers seems to be pointing the majority of his efforts on crafting the levels of this hack in order to achieve the best and most enjoyable exploration and adventuring experience he can manage. One can only hope that he works in some new abilities for our beloved bear and breegull to utilize in their adventures.

As of right now, there is no title screen available for Banjo Kazooie Returns but I am sure that the developer will create something for a full release when the times comes. As we have seen, the developer has been able to add their own textures and tilesets to the BK engine through the use of Banjo’s Backpack and this has allowed him to create some truly unique environments.

Banjo Kazooie Returns is set to play much like its parent game however the developer plans on adding in plenty of new puzzles and obstacles both familiar and reminiscent of challenges seen from the original. From what we have seen through trailers, the developer is expanding on the concepts of the original game and creating psuedo-open world environments for players to experience.

I believe the developer is currently making use of some unused tracks that are present within the BK engine but I am unsure whether or not they are planning on adding their own unique tracks to the game. One can only imagine that this will be the case as Banjo-Kazooie is largely about its wonderful soundtrack. Unfortunately, there is no way to acquire Banjo Kazooie Returns at this time as the developer is still working on it and has not quite gotten to a point where he believes that a beta release or something similar is warranted. In the mean time, you catch his streams here.

Buckle in, it may be some time. Banjo Kazooie Returns has no set release date at this time as the developer has stated that his is a side-project that he is working on, though, it is easy to keep track of the progress that he is making as he regularly streams his work on twitch. I would recommend any BK fans to keep an eye out on this one and to lend any support, or simply throw some suggestions, wherever they can.

If you are interested in this game, please let us know your thoughts or skip on over to the community following this hack and many others like it.