Super Mario Bros 3Mix is is a large-scale hack of the NES Game Super Mario Bros 3, it is meant to be a collaboration of past and future Mario games to bring fans and veteran players a new and exciting experience. If you want to see a video of Super Mario Bros 3Mix in action, check out the video below. 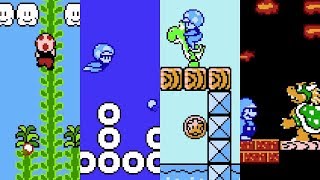 Super Mario Bros 3Mix (a play on the word “remix”) adds a wide variety of new features to the original Super Mario Bros. 3 and prides itself on taking aspects from other Mario titles and implementing them seamlessly for a simultaneously unique but familiar experience for ardent Mario fans. Each world carries a theme, often referencing other games entirely. Fans of the Mario franchise and of the modern games will find unique but familiar locales such as World 7 being based on the design of Super Mario Galaxy or World 4 being based on Super Mario World. Players will find many new enemies and challenges while enjoying Super Mario Bros 3Mix as well as changes to items (such as swapping out Frog for Penguin) and a slew of game alterations to various elements to match the theme of the world/level they are presented on.

The title screen of his hack stands out from the original title screen and displays the developers work into creating/altering sprites and tilesets. Super Mario Bros 3Mix takes the original graphics from its parent game and alters them while attempting to imitate the art style and over all aesthetic. This hack adds a number of new and modified sprites as well as other elements as necessary for new items and background elements.

Super Mario Bros 3Mix presents a vast array of new features to the game which both add variety to gameplay and also provide convenience to the player in a number of ways. Some of the most convenient features that have been added are a save system, which allows the player to save and continue at any point in time, as well as the ability to access Star Road, which is a section of the game that allows you to move back and forth between worlds at your leisure.

Long time Mario fans will notice familiar concepts, locations, and items that appear in other Mario games, such as Star Coins which can be collected to appeal to a players completionism and are also used to unlock secret areas in the game.

A handful of the songs from the original game have been slightly remixed to sound different while there are a number of songs that have been yanked from other Mario titles and implemented thematically. So is this game worth a try? Super Mario Bros 3 Mix is an extremely ambitious hack which makes an absolutely colossal amount of changes to the classic Super Mario Bros. 3 game accomplishing the task of creating a vastly altered and unique experience that fans will lose themselves in. The developer crafted this experience to look and feel like the original game but also brought in a variety of new elements to set it apart as an impressive psuedo-spinoff.