Castlevania Chorus of Mysteries is a fan based ROM hack for the NES. This hack is a drastic overhaul from the original game. You can expect a new story as well as new game play elements. Below is a youtube video of Castlevania Chorus of Mysteries 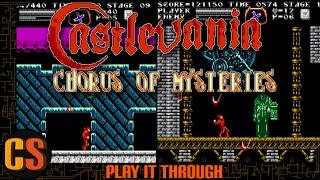 Castlevania Chorus of Mysteries where a new protagonist named Armund who has gone to explore the Castle of Count Orlox, a powerful vampire.

Unsurprisingly, the quest takes Armund into the mountains of Romania where he’s told that he may find the answers he seeks inside the Castle of Count Orlox

Castlevania fans will not be disappointed with this game as it feels like a natural sequel to the original game. The game is quite short with 5 playable levels but don’t expect to complete this game quickly as the difficulty is about the same as the original game. Overall, this is a great game for fans of the series who are looking for a new Castlevania game to sink some time into; it has a lot of nice features that easily makes this one of the better ROM hacks available for this series. So is this game worth a try? Yes it is, this game will appeal to the hard core mario fan and also people who have never played mario before.

A terrifying castle rises up from the mist. Along with the castle rose a dark powerful being named Count Dracula Vlad Tepes. A man named Trevor Belmont was fated to defeat the powerful vampire, aided by a witch named Sypha, Dracula’s own son Alucard, and a pirate named Grant DeNasty. Together the team traversed the dark halls of Castlevania, defeating the count and his countless minions.