If you want to see a video of Super Mario World Odyssey in action, check out the video below. 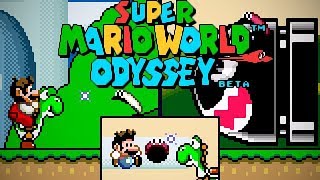 Super Mario World Odyssey is a mash-up of the classic Super Mario World (SMW) and the much more recent Super Mario Odyssey borrowing the latter’s major game mechanic while remaining true to the concept of SMW and maintaining it’s award winning charm.

Experience SWM as you never have before, taking the shape of Banzai Bills, Parakoopas, Message Blocks, and more as your tear across the Mushroom Kingdom to defeat bowser.

Just like in the more recent Mario game, our hero is joined by Cappy who brings a twist to the conventional gameplay of other Mario titles. Take advantage of your environment and your enemies by possessing them for your own whims.

Some changes had to be made to sprites in this hack in order to account for the ability of possessing objects and enemies. The changes are usually done quite while also having the tendency of looking hilarious.

Super Mario World Odyssey plays nearly identically to the original game and maintains its charm while aiming for interesting and challenging maps in the vein of SMWs award winning level design.

The main change to gameplay in this hack is the addition of Crappy from Super Mario Odyssey which grants players the ability to possess objects and enemies and use their unique abilities to their benefit. This ability is gained in the game as a permanent ability and allows you to possess most things in the game with few limitations. That said, the lack of limitation on this ability often causes humorous glitches (some of which can be game breaking).

Most of the glitches I experienced in this one were when combining Yoshi and Cappy together. Often times while sitting on Yoshi and throwing Cappy on an enemy, both Mario and Yoshi will be dragged to the target and Yoshi will promptly be kicked off the map as though he were killed.

No new sound or music has been added to this hack.

If you wish to play this game you can download the Super Mario World Odyssey Rom by clicking here.

So is this game worth a try? Super Mario World Odyssey takes the best of both worlds, SWM and Odyssey, to bring you a mash-up experience and add a sprinkle of extra depth to the iconic and timeless Super Mario World. Players will experience all new maps and challenges unique from the classic SWM. Veteran players will feel the warm tingle of nostalgia while experiencing brand new levels and secrets. This hack is highly recommended for any SWM fan and even though it is in its beta stages the hack is only occasionally plagued by the unfortunate glitch. Keep an eye on this one and hopefully before long it will become the perfect experience we all look forward too.