Contra: Hard Corps Stationary Fire Plus is a small quality-of-life hack for Contra: Hard Corps that is highly compatible with a selection of other hacks used to create the ultimate Contra experience. This hack focuses on altering the way that the player changes Fire Modes. Below is a Youtube video of Contra: Hard Corps Stationary Fire Plus. 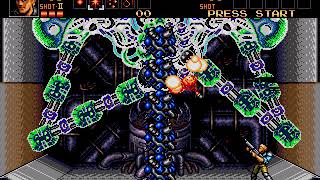 Stationary Fire Plus alters the input for changing Shot Mode within the game. The hack aims to make the mechanic of switching between Shot Mode, between mobile and stationary shooting more, intuitive and quicker to accomplish. This is a very simple change to the controls which takes inspiration from Contra 3. This mod is configured to work in sync with other mods such as MIJET Enhancement, Hit Points Restoration Hack, and IT.GAMER Ultra Hack 2.0 so that the player can combine their favorite hack for their preferred experience. The hack comes with three region localizations so it is sure to work with any official version of the game.

At the end of the day, this hack should give the player more control over their actions in order to compensate for the game’s hardcore difficulty.

Firing up the Stationary Fire Plus hack, the player will notice that changing between Shot Mode 1 (mobile firing) and Shot Mode 2 (station fire) is now achieved by simply holding down the ‘Mode’ button on a 6-button controller configuration (which was positioned as a shoulder button similar to the modern controllers). The Mode button would be the select/back button nowadays; simply remap the button to achieve the same effect.

Traditionally, Shot Mode was changed by pressing A and B simultaneously, while this is a fairly simple command to input it becomes slightly clunky when you factor in that you ability to jump and slide are taken form you in that instant which, due to the game’s hyperactive pacing, could end in your demise. With Stationary Fire Plus implemented, you actions flow rapidly just like the chaos of combat.

If you wish to play this game you can download the Contra: Hard Corps Stationary Fire Plus Rom from here

So is this game worth a try? Contra: Hard Corps Stationary Fire Plus is a quick and extremely helpful hack which provides a much needed quality of life element to the games classic input. The ability to change Shot Modes at will without much of a fuss is a huge boon and makes the game a degree easier. It is highly recommended for emulator users to remap the controls (default bound to Mode/Select) to a trigger or shoulder button on a modern controller. Easily to be considered a must have amongst fans of the Contra series especially considering its compatibility with a number of other useful hacks out there.