Zelda The Legend of Link is an overhaul hack of the NES Game The Legend of Zelda which carries itself more like a completely new and enticing experience rather than a modification of a beloved classic.

If you want to see a video of Zelda The Legend of Link in action, check out the video below. 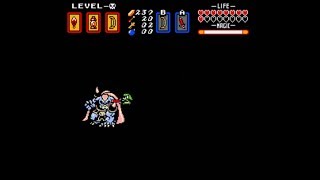 Zelda The Legend of Link is an expansive hack of The Legend of Zelda in which the developers have pumped years of talent and ambition into overhauling the entire game even going so far as to move the game to the much more advanced MMC5 mapper to support its vastly expanded content.

While the story remains much the same, venture across the mystical Hyrule on a quest to aid Zelda in defeating Gannon by collecting pieces of the Triforce, the adventure will send you into unknown perils and all new challenges. This hack as completely redesigned the classic game in light of new items presenting new and interesting puzzles.

A vast improvement from its parent game, this hack provides the player with a number of helpful mechanics present in other Zelda titles such as an arcing swing, spin attack, multiple item slots, etc. Everything has been reworked to achieve the optimal Zelda experience while remaining true to its design and concept.

This hack presents a unique title screen as well as modified music from the original game and a brief opening sequence.

The entire game has gone through a massive graphical overhaul to the point where the hack only reflects on the original’s art direction without copying it entirely. From the ground up, players will notice new sprites, environments, and items which capture the original game’s aesthetic but stand out as their own unique designs.

Zelda The Legend of Link offers a vastly altered gameplay experience presenting players with new challengers, dungeons, a new overworld, items, enemies, puzzles, and more. A mixture of quality-of-life changed, improvements, and all new concepts have been meticulously crafted into this hack on its way to creating the quintessential Zelda classic experience even going so far as to borrow items and abilities from later Zelda titles.

Fans will notice a slew of familiar items from all across the Zelda franchise such as Pegasus Boots or Rock’s Feather as well as specific features like combining certain items together for unique abilities.

Furthermore, the world has been greatly expanded upon (being several times larger than the original game) and includes both a Light and Dark world to explore. Veteran’s will likely remember becoming occasionally lost even at the maps default size, luckily, the developer has added a map which seems almost necessary considering the vast increase in real estate.

With Zelda The Legend of Link you will find all the same sounds and music from the original game although many of the songs have been altered/remixed.

So is this game worth a try? I would openly recommend Zelda The Legend of Link to fans of the franchise as well as to those who have yet to experience the original Zelda games. This hack does a fantastic job of bringing a modern feel to a classic title by expanding on items and abilities and taking inspiration from modern titles. Zelda The Legend of Link stands with its head held high appearing more like a professionally made spin-off title rather than a fan-made product.